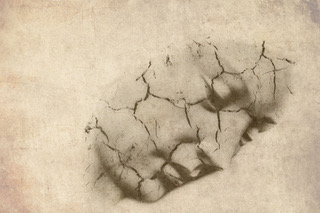 Heather and Christopher delve into the name and the inspiration behind The Virgin, The Beauty & The B!tch.  And so it begins…

h: as a woman and in conversation with other women, being beautiful has been distinctly tied to outer appearance.  The world tells women beauty is her most important aspect and that is where women need to place their focus, time and effort.  This is such a disservice since our outer appearance fluctuates and if you do not have the values from your culture telling you to work on your intellect, your passions, your skills and your goals, you don’t have much to fall back on when your looks start to change.  I think that is a very challenging hurdle for women to overcome today.

c: I saw this quote — “society has decided the most important virtue a woman can have is beauty”.

h: You see the effects of this everywhere.  I believe in a women’s right to do whatever she feels necessary to feel fabulous, but when you see it to the point of anorexia, and very dangerous [medical] procedures, all for the sake of aesthetics, it’s a huge problem.   It’s been 8 years since a good friend in high school passed away from anorexia.  It really hit home this construct of beauty and how we put it on a pedestal without other supports as to how women can gain self-worth and self-esteem.

c: however [beauty] is something that we can never escape from, it’s a gravity and we are all affected by it.

h: we are all drawn to things that are appealing to look at.  Beauty is in the eye of the beholder, at least that’s what they say.

c: however beauty is also a universal value we all recognize the moment we see it, the moment we are in its presence we are attracted to it.  Most of us will never reach that [beauty] externally, however, we have an opportunity to reach it internally.  That’s where the value needs to shift. It is to understand that quality and bring that to the fore as opposed to only physical beauty.

c: I was reading an article, comments from female models and actresses, the kind of beauty in women that men would mortgage their life to have on their arm.  Here is what one woman had to say about her beauty: “because I am pretty, people presume that I am shallow, my looks are a marketable asset so I manage them as any person would manage a vital asset, does that make me shallow?”

h: I can understand why she is posing the question. In a world that is drawn to certain features, I feel like either the big machine markets you, or you market your assets how you like.  Some would say she is marketing it all the time.  Anywhere she goes there’s the perception that her life is easier because people will treat her nicer, so maybe there is some validity to that.

c: I have something to add to that, another quote: “society forces me to rely on my looks, then condemns me for exploiting my looks.  I admit people do things for me that they would not do for less attractive people, and people have always gravitated to me for my looks and not for my capabilities.  After a while, you learn to give people what they want.  I find it demoralizing.”

h: part of that comment saddens my heart because it sounds as though she has given up on her other qualities because she’s found that her beauty is the only thing others see as being of value.

c: that’s an important point.  Beauty becomes a crutch, the tool you sharpen and the person never becomes fully rounded because that is the tool people will demand.

h: it’s setting you up for a lot of insecurity, to not have other things to help create a holistic sense of self.

c: but no one teaches this to beautiful people, we just use them for their beauty.

c: one more quote: “people use me like a trophy or a prop, I can not tell you how many guys ask me out only because they want to be with a beautiful girl on their arm.  I’m an accessory like a flashy car.  It also happens with very insecure women who just want to be my friend and live vicariously through my experiences.  It is very painful to discover that your friend does not really like you, but is only trying to shore up their own self-esteem.”

c: have you ever run into that yourself?

h: not with the friendship aspect, but I know about being seen as an accessory and being very cautious of that.  I really take the time to know a potential new partner, or a new friend, and get a sense of where their values and morals are.  I think you can assess that by seeing the care they put into the relationship.  Do they really take the time to understand your goals and ambitions, or do they challenge some of your thoughts so you have a better understanding as to why you might be taking a certain step in life.  If you’re listening, and if you are mindful, people will show you what their true intent is.

c: so what’s this secret society of women who hate beautiful women?  Have you found that?

h: oh my gosh yes.  I think it’s more than just beautiful women, it’s women hating other women for one aspect or another.  Since society places so much value on beauty it has become go-to for women to hate other women, but there are other aspects.  Maybe she is more athletic than you, or she is a perceived better mom, a better friend, anything they can pinpoint as you are doing this better than me that makes some women feel like they are not enough, which is common.  On the outside you seem to have things together better than me, and how dare you, so how can I find a way to pick you apart either in my mind or to other people.

c: where is that [pettiness] born in women.  With men, it’s pure aggression.

h: yeah, men can hash it out, but with women, I feel we have a harder time with confrontation. Heaven forbid you should face the person you’re having a problem with.  But, if you are having a problem it could be smoke screening your own insecurities.  I’m sure most women have felt that way about someone else.  I feel that the media has a huge role to play in this. Shows like real housewives of… every city in North America.  That’s just one small piece of watching women be catty to each other

c: it’s almost a role we have put media in, to stir the ugliest in human beings because then we can sit on the sideline and gaze.  We can be totally entertained, and not be involved if we don’t want to be.  But, it obviously washes over into our lives.

h: reality tv shows feed off people like the hungry ghost.  It’s almost like people band together with others to gossip about one person, and if you feel the same then there’s a connection.  You feel like someone understands you.

c: satisfaction in the connection with another human being, even tough it’s at the greasiest bottom of the pit there is still a connection there.  That’s what we are born, bred to do is to connect with other human beings.  We’ve just chosen the darkest instead of the lightest.

h: what is your definition of the beauty archetype?

c: I had two visions of beauty based on two characters we know very well.  It’s the external beauty we seem to revere and chase and mimic our entire lives.  You look at an icon, Marilyn Monroe, and wonder who was she beyond the caricature of a beautiful woman, a voluptuous woman.  What was her soul, like what was in there?  However, she’s the icon we had on our wall as teenagers and we still revere her how many years beyond her passing?  Yet there is another form of beauty.  The other character is Mother Teresa.  Not an attractive woman, however, who would ever question her beauty.  Nobody would ever question the beauty that woman had in her heart, for other human beings, for humanity.  Two very different forms of beauty.   One we chase, the other we just casually mentions once in a while.  That the imbalance we’ve created.

c: the bitch.  What is that all about?

h: there was a period in my life in university when I decided I would take women’s studies as one of my majors, and to my core, the world bitch really bothered me.  Coming from a historical standpoint where a woman was tied to a man’s finances for survival and she was in a very submissive and vulnerable position.  A man could snap his fingers to have his dinner made, or the house cleaned and what was she to do.  She had to comply.

c: I found it very interesting that Ernest Hemingway used the word [bitch] a lot in his work, but he had a different quality on the word.  He used it to mean a woman who showed ferocity, edginess, and grit.

h: oh, I love that.  I did something similar when I was trying to understand why that word had such a negative effect on me and I looked at another way of viewing that word.  Everyone has heard the concept of the Bad Bitch as a woman who is very sexually empowered, she has sexual autonomy, her own goals, and her own money.

h: I see that as the reclamation of the word.  Another construct of the word bitch being if I am going to stand my own ground, have my own values and work towards not faltering on those, who cares what you call me.  You can call me a bitch all you want.

c: there a song by a band hailstorm with the title, ‘you call me bitch like it’s a bad thing’.

h: but the word still does negatively affects some people.  Hopefully, we can bring some light to all you ladies and guys who are offended by the word.  All the power to you with finding ways to make your own definition of it and what it means to you, and deciding when you do or don’t use it for other people.

c: the thing about the world is its the taboo, and if you never talk about it, if it never comes up in conversation it can never change.  Its connotation will say exactly the same and there is more to the word than that. It needs to be brought to the forefront and that’s why it’s part of our name.

h: it’s important to not have words cripple people; if it’s used against you that it doesn’t need to tear you to bits, instead you create space so it can be analyzed and broken down into what it means to you.

h: that’s what this podcast is all about.

c: it’s about bringing power to and exposing things we may have different perspectives on, but only because they were never explored, never discussed.

h: and how they create or devalue feminine energy and traits.c: this show is not just only our voices, it’s the voices of people who align or don’t align with us, it’s your voice too and we want to hear those voices. 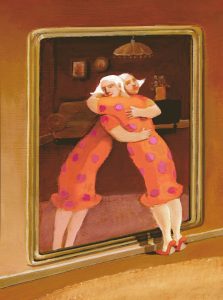 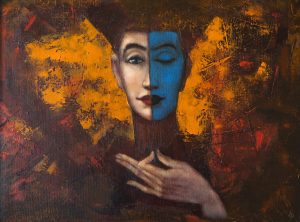